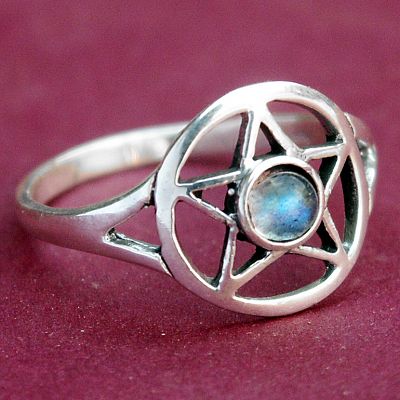 How could you not feel magical with this on your finger? The smoky blues of the labradorite gemstone are simply stunning. There's no better choice than a pentacle ring if you want a piece of jewelry that will clearly proclaim your pagan faith to the world. Where does labradorite come from?
Labradorite was first discovered in Labradore, Newfoundland, in Canada. There is a legend that says that long ago, mysterious lights were trapped inside the stones along the rocky Canadian shoreline. A warrior saw their plight, and freed them by striking the stones with his spear. Most of the lights escaped to the sky, and became the Northern Lights, and those that remained trapped became bits of labradorite gemstones.

That's a beautiful gemstone! Why isn't it used more often in jewelry?
The raw material is abundant, but labradorite is difficult to cut and polish in such a way that it reveals the rich iridescent colors in its depths. That characteristic sheen, or "schiller", is most often shades of violet, green, and blue, although other colors may be seen.

Where can I find similar items?
Try these pages:
Do you have any other questions about our Silver Labradorite Pentacle Ring?
We'll get back to you with the info you need. Click here to ask your question.