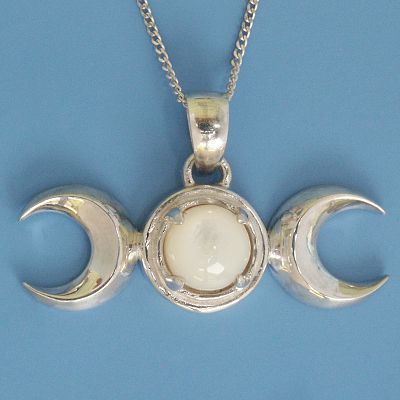 Share on:
When you gaze up into the night sky to spot the moon floating above the clouds, does it send shivers down your spine? Does your pulse quicken when you are touched by its silvery light? Do you feel your senses sharpen until you could swear you are one with the surrounding night? This isn't madness; this is magic!

Our Triple Moon Pendant measures 7/8" tall, including the bail. It comes with an 18" sterling silver chain. What is "Mother of Pearl"?
If you have ever seen the iridescent sheen on the inside surface of some sea shells, such as pearl oysters or freshwater mussels, you've seen mother of pearl in its natural form. These shellfish secrete a protective substance known as nacre, which coats the inside of their shell, making it smooth and lustrous. Nacre is the same substance that that the shellfish use to form pearls, when foreign particles, such as grains of sand, enter their shell. So, mother of pearl is the nacre-coated mollusk shell, and actual pearl gemstones are the much rarer (and more valuable) spheres made entirely of nacre.