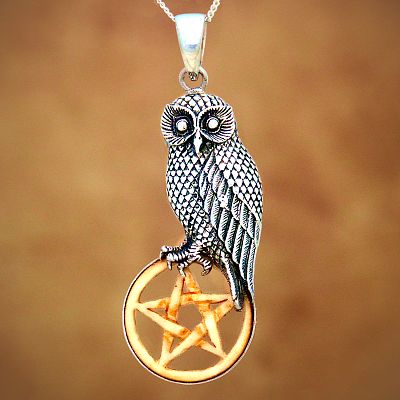 New!
When the hustle and bustle of the day is done, and the Moon is on the rise, that is when you feel most alive, and most attuned to the magical world that surrounds you. Just look at this Owl Pentacle Pendant. Could there be a more fitting piece of jewelry to reveal your essential nature? I certainly don't think so!

Every time I look at this pendant, I am blown away by the artistry of the designer- the shape and shading of each feather, the curiosity and intelligence in the owl's eyes, and the delicate carving of the pentacle that he perches on. This piece is undeniably enchanting, and one that you will treasure for years to come,

The sterling silver Owl Pentacle Pendant measures not quite 2" tall overall. An 18" sterling silver chain is included. What is the meaning of the owl?
As a totem animal, the owl is renowned for its wisdom, clairvoyance, and magic. Its acute eyesight and hearing give it the ability to discern secrets and deceptions in the moonlit world. Although some cultures consider the owl to be an unlucky portent, the owl is also known for being silent, graceful, and perceptive.

Didn't the goddess Athena have an owl?
Well, yes and no. In some stories, Athena is accompanied by an owl, and in others, she actually becomes the owl. Also, in various sources, she is referred to as "owl-eyed" or "flashing eyed". The connection between the goddess and the bird are undeniable though. The owl's ability to see in the dark naturally led to it being described as perceptive, watchful, and wise - all of which are fitting characteristics for a companion of the goddess of wisdom and war.

Where can I find similar items?
Try these pages:
Do you have any other questions about our Silver Owl with Bone Pentacle Pendant?
We'll get back to you with the info you need. Click here to ask your question.