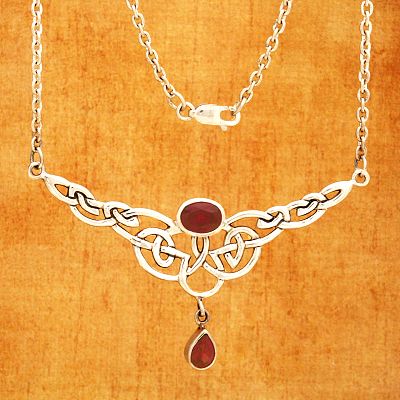 Dreams really do come true. How can you doubt it, when you clasp this splendid garnet Celtic necklace around your neck? Your eyes close for a moment and savor the touch of sterling silver against your skin. In your mind, you recall the brilliant red hue of the garnets. No other stone so completely captures the passion and fire you carry in your heart. Slowly, you open your eyes, ready to face the day like a queen.

The Celtic knotwork in this necklace evokes a sense of connection and continuity. Truly, the Silver Celtic Passion Necklace is a treasure. Let it work its magic on you today. Garnet is my birthstone.
You must be a January baby! Yes, garnet is the birthstone for the first month of the year. Its brilliant color and unique energy are a good match for the vibrant souls born at this time of year.