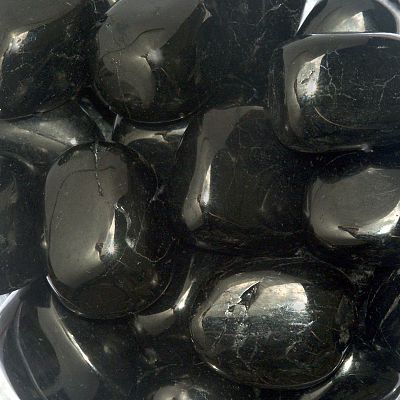 
Mmm, there's nothing quite like the glossy black beauty of Jet. Unlike most gemstones, Jet is not actually a mineral. Jet is formed from organic material. Specifically, it is the result of water-logged, decaying wood being subjected to extreme heat and pressure, and over the course of millions of years, this dense material becomes fossilized. When you hold a piece of Jet in your hand, you are quite literally touching history!

Jet was one of the earliest gems to be sought out by humans, both for its beauty and for its metaphysical properties. Even as far back as the Neolithic period, it was carved into beads, and by the Roman era, it was widely used in jewelry. Amulets were often carved from Jet, to protect the wearer from physical harm. It was reputed to be especially effective against the evil eye, and against snakes. Thereafter, Jet largely fell into disuse, except for a brief period of popularity in the Victorian period, when it was used extensively in mourning jewelry.

Jet is sometimes known as "black amber", a nod to the shared organic origins of both stones. And like true amber, Jet is surprisingly lightweight compared to other gemstones. Interestingly, amber and Jet both can generate a weak static electric charge when rubbed vigorously.

In addition to being seen as a stone capable of protecting the living, Jet is also reputed to shield the soul from danger after death. Pueblo indians often buried it with their dead for this very reason. It was also thought to alleviate grief in those who had lost loved ones. Ancient Greeks believed that one who wore Jet would be favored by the gods. Christians later mirrored this belief, using Jet for rosary beads in order to find favor with their God.

Jet is said to dispel external threats (such as violent attacks, rumors, etc) as well as internal risks (depression or bad dreams, for instance).

You are purchasing a set of three tumbled Jet gemstones. Stones will vary in size and shape, but most are in the range of 3/4" to 1".


How should I use my gemstones?
Keep them close by, in your pocket, or in a small dish at your work space. Handle them often, as you focus on your needs and wishes. Sleep with them under your pillow. Place them on your altar. Whisper your wishes to them when no one else can hear you. The only thing we do NOT recommend doing is using your gemstones to infuse water that you will be drinking.

How can I cleanse my gemstones?
Over time, gemstones can pick up negative energies as they are used. Many different methods can be employed to cleanse your stones. Bury them in a small container of salt for a few days. Hold them in running water (this is not recommended for soft gemstones like selenite or jet). Let them sit overnight in the light from a full moon. Place them where a fresh breeze can pass over them. What other methods can you think of?

Where can I find similar items?
Try these pages:
Do you have any other questions about our Jet Tumbled Gemstones?
We'll get back to you with the info you need. Click here to ask your question.

5 stars
A review by Erika Schulze for Jet Tumbled Gemstones