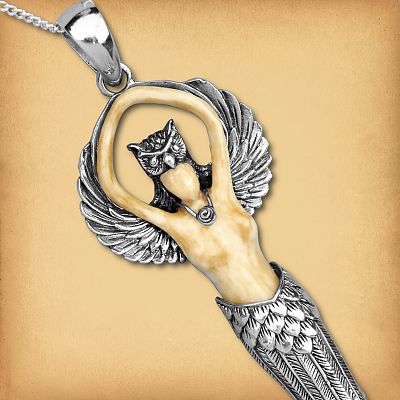 
Since ancient Greek times, the owl has been the symbol of the goddess Athena and her great wisdom. Like the owl who can see through darkness, one with true wisdom will be able to see the Truth, even when it is obscured. Made from carved, tea-dyed bone and sterling silver, the Owl Goddess Pendant is a true work of art that is as meaningful as it is beautiful.

This breathtaking pendant measures approximately 2" tall, including the bail. It comes with an 18" sterling silver chain.


Didn't the goddess Athena have an owl?
Well, yes and no. In some stories, Athena is accompanied by an owl, and in others, she actually becomes the owl. Also, in various sources, she is referred to as "owl-eyed" or "flashing eyed". The connection between the goddess and the bird are undeniable though. The owl's ability to see in the dark naturally led to it being described as perceptive, watchful, and wise - all of which are fitting characteristics for a companion of the goddess of wisdom and war.