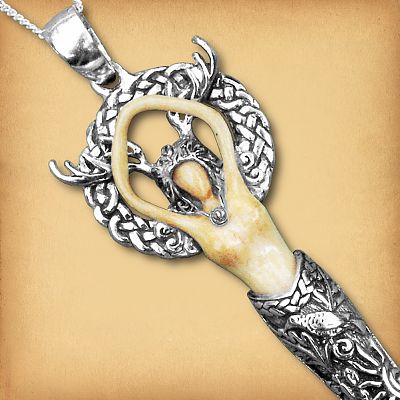 
In the heart of every woman, there is a primitive pulse that beats in time with Nature. Like the horned Goddess herself, we can be fiercely protective, gently nurturing, or deadly dangerous, depending on the need. This pendant, expertly crafted from carved bone and sterling silver, celebrates that wild and free soul within each of us.

This breathtaking pendant measures about 2-1/4" tall, including the bail. It comes with an 18" sterling silver chain.

Where can I find similar items?
Try these pages:
Do you have any other questions about our Small Silver Forest Goddess Pendant?
We'll get back to you with the info you need. Click here to ask your question.