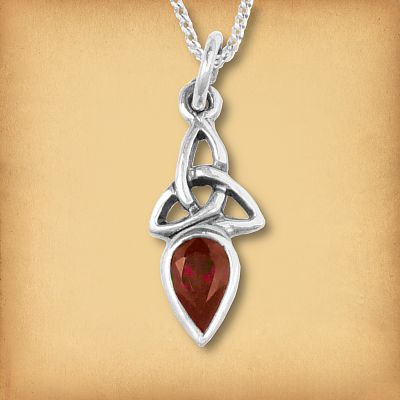 
This little pendant packs a powerful punch, despite its small size. The fire of the garnet teardrop is set off to perfection by the gleaming silver of the Celtic knot. Now, if you want something flashy and eye-catching, this may not be for you. But if you want a piece of jewelry that speaks with a whisper rather than a shout, then prepare to fall in love with this elegant Celtic pendant. Garnets have long been associated with fire and passion. And according to gemstone lore, they can protect travelers and promote good health.

The Garnet Trinity Knot Pendant measures approximately 3/4" tall, including the bail. It comes with an 18" sterling silver chain.


What's a good excuse to give/get this pendant?
Garnet is the birthstone for the month of January, so anyone celebrating their birthday at the start of the year is likely to feel a strong affinity to this stone. Garnet jewelry is also a traditional gift for 2nd, 6th, or 19th wedding anniversaries. But you truly don't need any excuse to give this pendant to someone you care about. They will be head-over-heels-happy to receive it, any time of year.

Where can I find similar items?
Try these pages:
Do you have any other questions about our Silver Garnet Trinity Knot Pendant?
We'll get back to you with the info you need. Click here to ask your question.