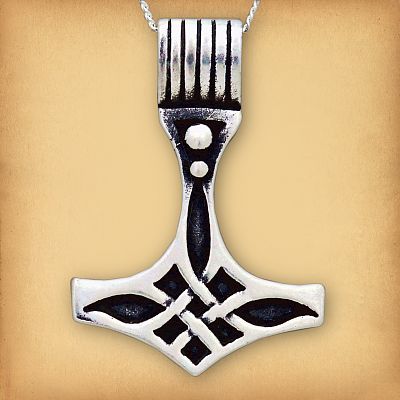 This Thor's Hammer pendant is cast in sterling silver, and decorated with sleek lines of Celtic knotwork. It measures 1 1/8" tall, and comes with an 18" sterling silver chain. Please note that the hole for the chain on this piece is quite large. If you are looking for a pendant that can hang from something more robust, like a leather cord, this would be easy to swap out.

Where can I find similar items?
Try these pages:
Do you have any other questions about our Silver Celtic Thor's Hammer Pendant?
We'll get back to you with the info you need. Click here to ask your question.

This one has a beautiful shine and weight to it. Absolutely wonderful quality with this pendant. I'll bet it's one I'll wear often.