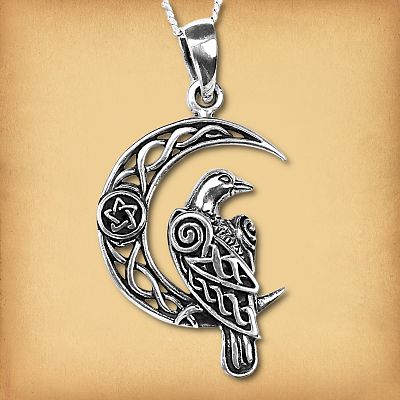 
Embrace the dark! In a world of shadows and shade, your soul thrills to the beauty of the crescent moon in the midnight sky, and the flash of night-black wings in the moonlight— a beauty reflecting in this stunning sterling silver pendant with a Celtic raven perched on the arms of the new moon.

Full of magic and mystery, this silver raven pendant incorporates Celtic knots on both the moon and the bird. Even the tiny pentacle star at the heart of the moon, features delicately woven points.

The Celtic Moon Raven Pendant measures 1 1/4" tall, including the bail. The pendant is made of sterling silver, and it comes with an 18" silver chain.


What's so special about ravens?
Aside from their rich tradition in mythology and symbolism, ravens are fascinating birds in their own right. They are highly intelligent birds. They can use logic and reasoning to solve puzzles, and often use tools to accomplish their goals. They are also playful, and seem to have a wicked sense of humor, hence their reputation as a trickster spirit.


Where can I find similar items?
Try these pages:
Do you have any other questions about our Silver Celtic Moon Raven Pendant?
We'll get back to you with the info you need. Click here to ask your question.