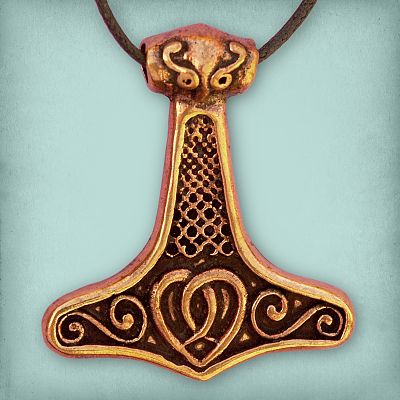 
Thor's Hammer pendants, modeled on the Norse deity's own mighty weapon, have been worn by followers of the Norse pantheon for many centuries. From the heyday of the Viking Age right down to modern times, Thor's hammer pendants have been popular amulets for strength and protection. Amongst modern pagans, it is often worn as a symbol of Ásatrú or Heathenry. This Thor's Hammer pendant is cast in bronze, and adorned with a simple woven heart, to remind warriors that they should love as fiercely as they fight. It measures 1 3/4" tall, and comes on a 33" black cord which can be tied at whatever length you need.


Did you know…?
Thor was the Norse god of the storms, and his name meant "thunder". In some stories, his hammer is referred to as a thunderbolt, which would return to his hand after being thrown. According to legend, Thor's Hammer Mjolnir, was originally meant to have a long handle so that it could be swung with both hands. The old tales say that the weapon was being forged for Thor by a pair of dwarfish brothers. In the middle of their work, Loki snuck in to their workshop, disguised as a fly. He bit one of the dwarves, causing him to draw the hammer out of the forge before the proper time. This resulted in a short handle for the hammer, so that it could only be swung one-handed. In spite of that, Thor wielded it with deadly accuracy in defense of Asgard, the home of the gods.

Where can I find similar items?
Try these pages:
Do you have any other questions about our Bronze Thor's Hammer Pendant with Heart?
We'll get back to you with the info you need. Click here to ask your question.