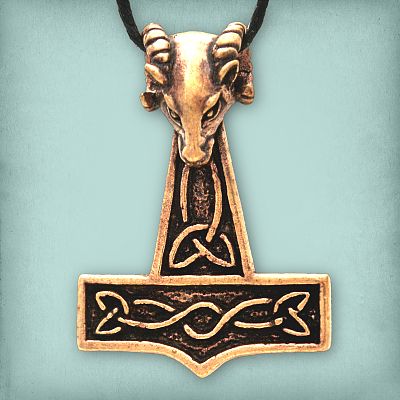 This Thor's Hammer pendant is cast in bronze, topped with a fierce ram's head, and richly decorated with Celtic knotwork. It measures 1 3/4" tall, and comes on a 33" black cord which can be tied at whatever length you need.


Did you know…?
Thor was the Norse god of the storms, and his name meant "thunder". In some stories, his hammer is referred to as a thunderbolt, which would return to his hand after being thrown.
According to legend, Thor's Hammer Mjolnir, was originally meant to have a long handle so that it could be swung with both hands. The old tales say that the weapon was being forged for Thor by a pair of dwarfish brothers. In the middle of their work, Loki snuck in to their workshop, disguised as a fly. He bit one of the dwarves, causing him to draw the hammer out of the forge before the proper time. This resulted in a short handle for the hammer, so that it could only be swung one-handed. In spite of that, Thor wielded it with deadly accuracy in defense of Asgard, the home of the gods.