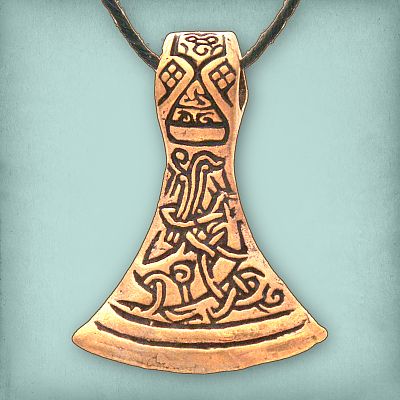 
Capable of smashing through shield and armor with a single blow, the axe was was one of the deadliest weapons in the ancient world. To a barbarian warrior, a pendant such as this would have represented not only his prowess in battle, but also his wealth and social status as well.

On every inch of its surface, this bronze pendant is covered with shapes and patterns drawn from Celtic and Viking art. The end result is a strikingly unconventional piece of jewelry that packs a powerful punch.

This Celtic Axehead Pendant measures 1 3/4" tall, and has designs on both sides of the axe head, and comes on a 33" black cord which can be tied at whatever length you need. This pendant is made of bronze.


So, is it a Celtic pendant or a Viking pendant?
Well, to be honest, it's a little bit of both. You see, the Vikings and the Celts lived side by side for much of their history— fighting, trading, and sometimes intermarrying. It's no surprise then that certain aspects of their cultures, art and weapons included, were shared and spread as the two tribal cultures influenced each other.

How large is the hole in the pendant?
The hole is 1/4" in diameter. It can easily accommodate a more substantial cord if you wish to swap it out.

Where can I find similar items?
Try these pages:
Do you have any other questions about our Bronze Celtic Axehead Pendant?
We'll get back to you with the info you need. Click here to ask your question.

5 stars
A review by Pardus for Bronze Celtic Axehead Pendant

I received this as a gift. I wear it every day. Sometimes I get compliments when people notice it. And folks ask about it's significance. I thought it was based on a viking burial or something, but perhaps I was mistaken. The pointy bits do sometimes poke me when i'm sleeping, but I don't mind. I enjoy having it, and seeing it appear in the mirror. It's solid and has a nice weight to it.

5 stars
A review by Bobby for Bronze Celtic Axehead Pendant

Exactly what i ordered and received in two days! Will order again when I see something i want.

5 stars
A review by Bobby for Bronze Celtic Axehead Pendant

Exactly what i ordered and received in two days! Will order again when I see something i want.

Again just like my last order, I ordered this on a Saturday and it was in my mailbox on Monday! The pendant was perfect for my exhusband as his Father's Day gift.

5 stars
A review by tlowe for Bronze Celtic Axehead Pendant

Really nice piece with a strong cord. Unbelievable this is only $12.00