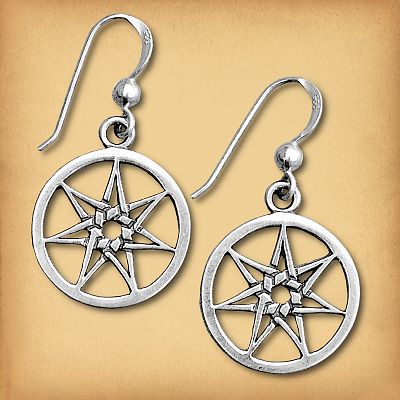 
As ethereal as a moonbeam, as magical as the faery folk themselves, these Fairy Star Earrings are sure to weave their own spell any time they are worn. Close your eyes, and imagine yourself dancing in an enchanted forest glade. Are these the earrings you are wearring?

Our Fairy Star Earrings are made entirely from sterling silver, including the French hooks. They measure 11/16" in diameter, and 1 5/16" long with the hook. For pierced ears only.


What does this symbol mean?
The seven-point star is also called a septagram or heptagram, both of which translate roughly to "seven lines". More importantly, this magical glyph is known as a Fairy Star, or sometimes, an Elven Star. Either way, it is recognized as a symbol of the shining realms of the Fae Folk, and those who follow the faery faith often use it much as other pagans use the pentacle.

Specifically, the seven points represent the north, south, east, and west, as well as above, below, and within, thus encompassing the entirety of the world, seen and unseen. Think of this symbol almost as a portal, that links the realm of magic to our own world. Wouldn't it be lovely to have that sort of connection with you all the time?

Does this symbol have any other meanings?
Originally, the seven-point star was favored by people who felt that they were magical beings who had somehow crossed over into the world of humans, although at heart, they were not quite human themselves. Over time, that idea has been expanded, and now, the seven-point star is often used by members of the "Otherkin" movement, who feel that their essential nature is something other than human, whether that be elf, unicorn, wolf, angel, or any one of a plethora of beings, both mythical and not.

Where can I find similar items?
Try these pages:
Do you have any other questions about our Silver Fairy Star Earrings?
We'll get back to you with the info you need. Click here to ask your question.