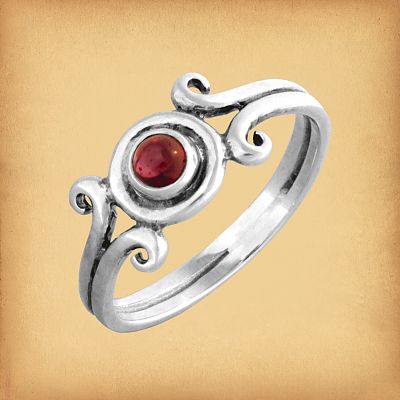 
Take a look at this Garnet Scroll Ring, and ask yourself, "What's not to love?" From the graceful and eye-catching setting to the wine red garnet at its heart, this ring deserves to be the new favorite of your jewelry collection. Seriously, have you ever seen such a beauty?

The Garnet Scroll Ring is a stand-out, all on its own, but if you're feeling adventurous, you should also consider wearing it as a stack ring. The shape of the scrolls on either side of the garnet make a convenient space for other rings to nestle in tight beside it.

The Garnet Scroll Ring is made of sterling silver, set with a genuine garnet cabochon. The ring is approximately 3/8" across at its widest point. This ring is available in sizes 5-10, whole sizes only.

What is a "cabochon"?
Unlike a facetted gemstone, which has been cut to have multiple flat surfaces, giving it a sparkling appearance, a gem that is cut "en cabochon" is smoothly domed on top, and has a flat base. Instead of flashes of brilliance, such as a facetted stone would give, a cabochon has a steadier, more consistent shine.

How should I care for my garnet jewelry?
Garnet is actually fairly trouble-free when used in jewelry. It is a relatively tough stone, and not likely to be damaged by day to day wear. If it gets dirty, simply wash it with warm soapy water. Use a soft cloth to polish the silver, and you're good to go!

Where can I find similar items?
Try these pages:
Do you have any other questions about our Silver Garnet Scroll Ring?
We'll get back to you with the info you need. Click here to ask your question.