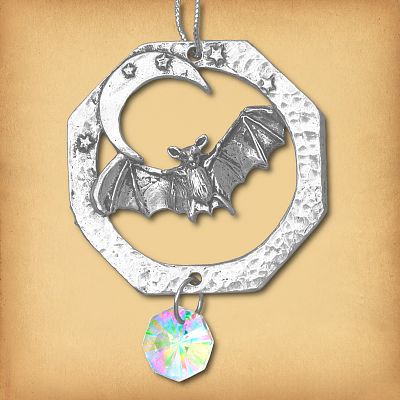 
He'd rather be winging his way through the darkest night, of course, but that won't stop this beautiful little bat from hanging around in the sunlight for a while. Place one of these suncatchers in any window of your home, and let the Austrian crystal add a rainbow to your room. You'd have to have bats in your belfry not to love this little guy!

The Bat Suncatcher is made of lead-free pewter, and measures 2 3/4" tall, including the crystal.


What is an Austrian crystal?
Austrian crystals are a type of rhinestone, so named for their rich history originating on the shores of the Rhine River which borders the country of Austria. In the 18th and 19th centuries, inventors from the area developed and improved upon methods of making man-made glass crystals which mimicked the sparkle and shine of naturally occurring rock crystals. Since that time, the technology has steadily advanced, resulting in crystals of superior quality and a reasonable price.

Where can I find similar items?
Try these pages:
Do you have any other questions about our Bat Pewter Suncatcher?
We'll get back to you with the info you need. Click here to ask your question.