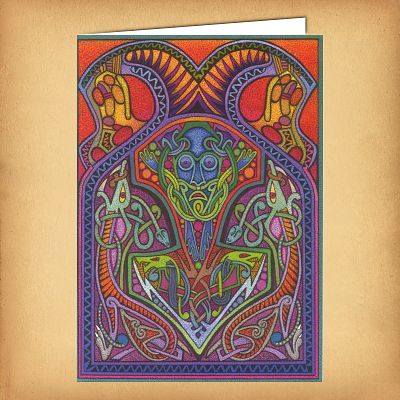 
Thor was the Norse god of the storms, and his name meant "thunder". Little wonder, then, that his hammer, which takes center stage in this design, features dual thunderbolts at its base. According to legend, Thor's Hammer Mjolnir, was originally meant to have a long handle so that it could be swung with both hands. The old tales say that the weapon was being forged for Thor by a pair of dwarfish brothers. In the middle of their work, Loki snuck in to their workshop, disguised as a fly. He bit one of the dwarves, causing him to draw the hammer out of the forge before the proper time. This resulted in a short handle for the hammer, so that it could only be swung one-handed. In spite of that, Thor wielded it with deadly accuracy in defense of Asgard, the home of the gods.

In addition to the full color artwork on the front of the card, there is a subtly shaded Thor's hammer on the inside. Other than the artwork, the card is blank, so you can add your own message.

Who says that letter writing is a lost art? This card is a true delight, for both the sender and the lucky recipient. They measure 6 3/4" by 4.


Who is the artist?
This card is based on a work by the British artist Courtney Davis, who is best known for his extraordinary mastery of Celtic art, and his deeply spiritual approach to his work.

Is this an example of Celtic art or Norse art?
There are many similarities between Viking and Celtic art, thanks to the close contact between the two cultures that lasted for hundreds of years. You'll find the same sorts of stylized figures, both human and animal, and interlaced patterns to form borders and backgrounds. As a general rule of thumb, Celtic art appears more static and balanced, where examples of Norse art are more apt to be asymmetrical, and filled with restless energy.

Will this card fit in a 5" by 7" picture frame?
Yes! This card makes a lovely and inexpensive bit of Viking art for your walls.

Where can I find similar items?
Try these pages:
Do you have any other questions about our Mighty Thor Greeting Card?
We'll get back to you with the info you need. Click here to ask your question.