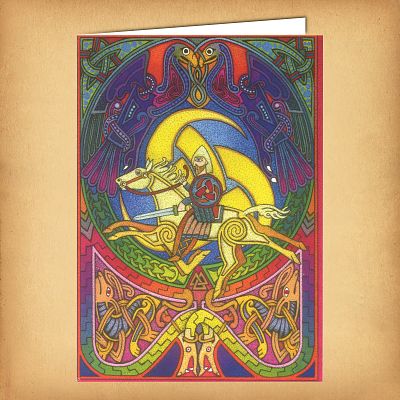 
Mounted atop the eight-legged horse Sleipnir, Odin charges into battle with his sword in hand. Above him, his raven companions Hugin and Munin keep watch. Sleipnir's extra legs gave him the ability to travel between all the Nine Worlds, carrying his rider with him. To round out his family of animal familiars, Odin's two wolves, Geri and Freki appear in the lower corners of the design.

In addition to the full color artwork on the front of the card, there is a subtly shaded Thor's hammer on the inside. Other than the artwork, the card is blank, so you can add your own message.

Who says that letter writing is a lost art? This card is a true delight, for both the sender and the lucky recipient. They measure 6 3/4" by 4.


Who is the artist?
This card is based on a work by the British artist Courtney Davis, who is best known for his extraordinary mastery of Celtic art, and his deeply spiritual approach to his work.

Is this an example of Celtic art or Norse art?
There are many similarities between Viking and Celtic art, thanks to the close contact between the two cultures that lasted for hundreds of years. You'll find the same sorts of stylized figures, both human and animal, and interlaced patterns to form borders and backgrounds. As a general rule of thumb, Celtic art appears more static and balanced, where examples of Norse art are more apt to be asymmetrical, and filled with restless energy.

Will this card fit in a 5" by 7" picture frame?
Yes! This card makes a lovely and inexpensive bit of Viking art for your walls.

Where can I find similar items?
Try these pages:
Do you have any other questions about our Fierce Odin Greeting Card?
We'll get back to you with the info you need. Click here to ask your question.